I've started a new cozy mystery series under my pen name of April Fernsby. The first book is now out and it's free today and tomorrow - 20th and 21st January. 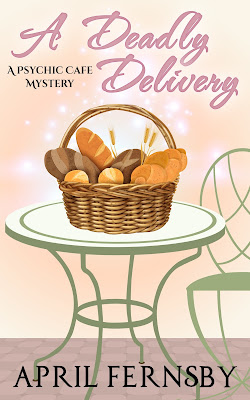 Karis Booth has had psychic abilities for as long as she can remember. But this is the first time she’s used them to solve a murder.
Things are changing rapidly for Karis. As well as filing for divorce from her unfaithful husband, she decides it’s time to make peace with her estranged sister, Erin. With trepidation, Karis visits the café which Erin owns. To her great relief, Erin welcomes Karis back into her life with open arms.
During their reconciliation, a young woman, Carmel, calls into the café with a bread delivery. As Karis watches Carmel, she experiences a strong psychic vision. She sees two shadows following Carmel. Only one of the shadows belongs to Carmel — the other belongs to the person who is going to murder her later that day.
With help from her sister and an old neighbour, Karis does all that she can to find out who murdered Carmel. It doesn’t help that the investigating officer is an ex-boyfriend who broke up with Karis because he couldn’t cope with her psychic abilities. Despite this, Karis won’t rest until she finds the killer.